The Cambridge Hands-On Science (CHaOS) Summer Roadshow applied for a Public Engagement Grant to help finance their 2018 summer tour. Here’s what happened on the road! 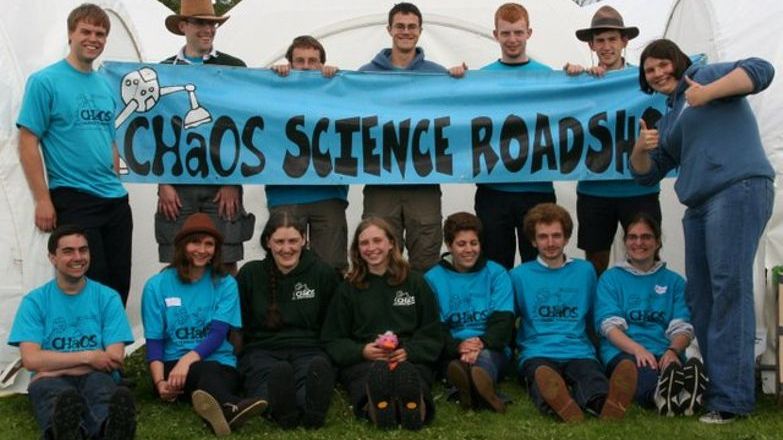 A team of volunteer students from the University of Cambridge toured the country with a range of interactive experiments designed to show children aged 9 to 13 and families that STEM subjects, including microbiology, are fun and accessible to everyone.

Over the course of 7 weeks we visited nine schools, thirteen public events and two scout jamborees with a total estimated audience of over 6,000.

This year’s roadshow started at the Cambridge Scouts District Camp, entertaining young scouts by getting them to solve engaging puzzles. (Some loved it so much they didn’t want to move on to the bouncy castle and rock climbing!)

On weekend two, we headed to Essex where public events at The Forum, Southend and the Museum of Power, Langford were well-attended despite competing with the sweltering weather and the World Cup!

The next weekend, we were at Bristol Central Library on Saturday, and Clifton Suspension Bridge on Sunday. Perhaps helped by England not making it to the World Cup Final, we had a fantastic turnout of over 400 people on Sunday: families were drawn to our stalls on the bridge as they attempted to visit Wallace and Gromit statues scattered across Bristol in the glorious weather.

Weekend 4 saw us visit the MAC in Birmingham – an arts and culture venue – and the University of Birmingham’s Lapworth Museum of Geology. The museum’s impressive galleries slightly outshone CHaOS’s modest rocks and fossils box, but we were able to enthuse museum visitors who got to grips with science beyond spotting their favourite dinosaurs!

We ended with Norjam (Norfolk scout jamboree), where our cuddly microbes helped place CHaOS in the top three activities in the Craft Barn for every single scout and guide questioned!

All our events were a hit. Via 229 paper questionnaires, 96% of visitors at public events said they enjoyed the event, 87% learned “Quite a lot” or “A lot” and 93% responded “Yes” when asked if they would come to an event again (the remainder said “Maybe”).

Respondents also commented on the most interesting thing they learned and let us know how they heard about our event: over half found out through social media, suggesting our latest publicity and engagement strategies are working well.

A good variety of experiments were cited as the most interesting. Our biggest microbiology experiment – using cuddly bacteria, viruses and parasites to explore “good” and “bad” bacteria, the importance of hand washing and public health issues such as the spread of disease and antibiotic resistance – featured in the top five.

Visitors were keen to learn further microbiology, suggesting they would like to see more about diseases, microscopy and microorganisms in food. Another highly-rated experiment with links to microbiology was “Blood Groups”, where audiences learnt about how our immune system recognizes the difference between invading microorganisms and the body’s own cells.

Our main aims were to engage those who don’t often get involved with scientific activities, to inspire participation in science among those who might not otherwise consider it.

Visitors’ backgrounds were determined by asking on the questionnaires how often they engage with science museums, experiments and documentaries, rated on a 5-point scale (0 to 4). The scores were added for a total out of 12, allowing us to divide respondents into groups to analyse their other answers.

Our demographics at public events in 2018 successfully covered a diverse range of backgrounds: the proportions of visitors with scientific engagement scores of <4, 5-7 and >8 were roughly equal at 33%, 40% and 27% respectively, showing that we engaged plenty people who may do scientific activities no more than a couple of times a year. Moreover, visitors of all backgrounds were similarly positive in their responses.

Keeping up with the kids

We also toured several schools, carefully selected to help widen participation and interest in science and microbiology. In the first week, we visited Ormiston Denes Academy, Thomas Gainsborough School and Archbishop Sancroft School in Norfolk. Lowestoft, where the first is situated, has a participation rate in higher education of just 11.3% (as measured using the Office for Students’ POLAR map).

Many schools also had large numbers of students entitled to Free School Meals, low attainment standards at the end of KS3 compared to the national average, or a high number of “transient students” including refugee children and those from traveller families.

Heolddu Comprehensive School (pictured) thanked our volunteers for being “superb with our pupils, many of which have learning and physical disabilities and were thrilled to be able to access the various experiments.”

A further aim of the roadshow is to engage student volunteers with science outreach, increasing the likelihood of future participation. Overall 99 students were involved in planning and delivering the roadshow; our post-roadshow survey indicates 48% of these had done no science outreach outside of CHaOS. Moreover, 97% of respondents said they would recommend volunteering to a friend.

CHaOS is very grateful to SfAM for its support of this project. For more information on our roadshows, please visit our website where you can also read our latest Roadshow Report containing more stories about what we got up to.