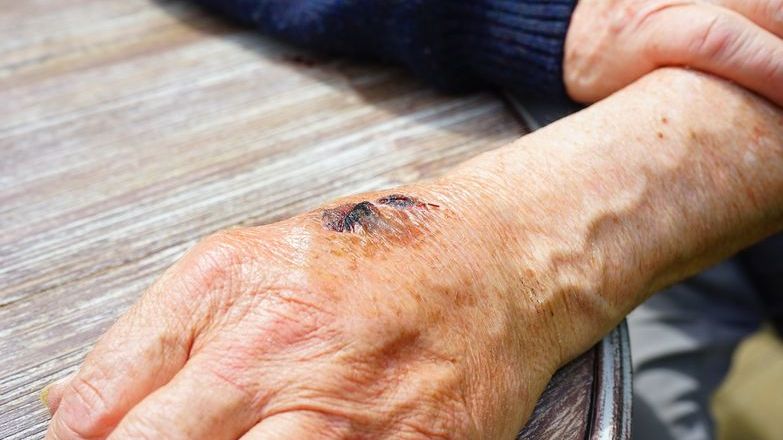 The purpose of this project was to modify an in vitro five-species biofilm model developed to represent a chronic wound infection, by replacing the currently used substratum with ex vivo pig skin. The funds provided by SfAM allowed for the purchase of a peristaltic pump which is required to perfuse the model with simulated wound fluid.

Pig skin for use in the model was sourced from a local butcher and would otherwise be a waste product. The pig skin was disinfected prior to use to remove the endogenous bacteria so that these would not interfere with the model. 8mm biopsy punches were used to cut sections of pig skin and the fat layers removed. These were fitted into our biofilm flow device and the device filled with simulated wound fluid (SWF). A cocktail of five bacteria typically found in chronic wound infections were applied to the surface of the pig skin; the biofilm flow device was then connected to the peristaltic pump to perfuse the pig skin and bacterial growth monitored for 72h by total viable count using selective agars.

Over the 72h time period the numbers of each bacteria established a steady state with very little competition between species. Notably, some members of the biofilm were recoverable only as small colony variants when cultured in the mixed biofilm. Importantly the bacterial counts and population dynamics were reproducible within this model with several independent replicates investigated over the time frame of the research project. This was key to demonstrate that this ex vivo model is robust.

Compared to the in vitro iteration of the chronic wound biofilm model, one key difference was the recoverability of all five bacteria at each time point. In vitro only four of the five bacteria were recoverable by TVC at 72h. Further, competition between keystone pathogens within the biofilm was evident in vitro whereas ex vivo all five species grew in a steady state. Given that these bacteria normally co-exist in a chronic wound for extended periods of time, this indicates that our new model has parameters that replicate well the host environment. Interestingly SCVs were only observed in the ex vivo model.  SCVs are believed to play a role in persistence in chronic wound infection, and therefore this again underlines the necessity to replicate the host environment accurately for better modelling and understanding of infection.

These data will be written up as part of AGNs MRes dissertation, and we are also in the process of preparing the findings for publication as a novel ex vivo multispecies biofilm model for chronic wound infection that we intend to submit to the Journal for Applied Microbiology. Several members of the lab will benefit from the new model developed here with help from SfAM. Having capacity to run more than one model concurrently will enable us to investigate different host factors in parallel as we continue to refine this model and study other host environmental factors and the influence they have on bacterial interactions in chronic wound biofilms.