Alli Cartwright discusses the (not-so-humble) E. coli, and all the ways it's helped us as humans. 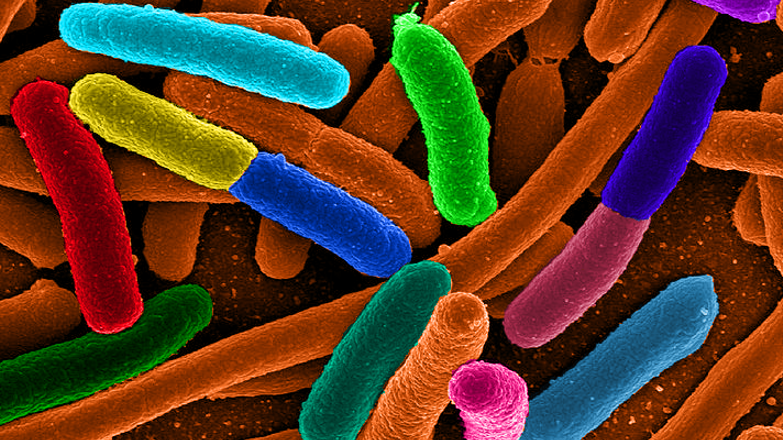 Before I entered the world of microbiology, I only knew the name of one bug – E. coli. This microbe seems so infamous that I still can’t pronounce its genus name Escherichia because I’ve never heard it said. Much like Attenborough or Clarkson the very mention of the name leads most people to the same mental focus point. As a child I was told of the ‘evilness’ of this microbe. It seemed to be lurking in foods waiting to make us sick. From my child mind, I placed E. coli in the ‘bad’ category so I wasn’t thrilled when I had to work with it aged 22: yet it has become my favourite microbe.

I’m stubborn and don’t like to change my view once my mind has been made up so when I started working with E. coli I continued with my previous view without a moments thought. That is until I got to buy an E. coli tagged with green fluorescent protein (GFP). Something about a glowing bacteria colony on an agar plate made it very, very cool. That Christmas I even dragged in my family to draw Christmas scenes on agar plates with my glowing microbe. When I read the data sheet explaining how it was biosafety level 1, I realised it was unlikely to make people ill so it dawned on me not all E. coli were bad. That was when I started to find out how much we engineered E. coli for our own benefit.

Somehow, I remembered my A level biology class on the production of human insulin. I remembered the teacher explaining how cow or pig insulin was used until E. coli was engineered to produce human insulin. Once the genes for human insulin were deciphered, this code could be added to the E. coli DNA to grow human insulin in the rapidly multiplying bug. The first commercial human insulin from E coli was produced by Genentech in 1982[1]. The process seems somewhat simple in today’s world where a plasmid is cut by restriction enzymes and joined to the human insulin gene cut from a chromosome, but at the time genetic work was in its infancy and I’m sure the process was much more difficult. Once the insulin gene was inside the bacterium, it could replicate producing multiple copies of the plasmid and thus insulin ready for purification and packaging to treat diabetics. E. coli has completely revolutionised the medical treatment for diabetes and it's not the only condition as 56% of pharmaceutical products derived from a living source are based on good old E. coli[1].

Using E. coli to reduce man’s impact on the world

While engineered E. coli can be used in health care, they can also be altered for industrial purposes. Among them are processes to try and reduce man’s environmental impact. With the WWF (World Wide Fund for Nature) predicting that there will be more plastic in our oceans than fish by 2050 it is a relief that E. coli has been engineered to make biodegradable plastics[2, 3]. E. coli has been engineered to use agricultural waste carbohydrates to produce chemicals such as polyhydroxyalkanoate (PHB) needed for plastic synthesis[3, 4]. An additional benefit of deriving these chemicals from E. coli is they replace the need to use petroleum thus further reducing the environmental impact of plastic production.

Not only has E. coli been commissioned to minimise our war on plastics, it has also been called into service to mitigate against human induced climate change. Excess atmospheric carbon dioxide is one of the drivers of climate change and although many countries strives to cut their carbon emissions, it is inevitable we will need a hand to remove excess carbon dioxide. Instead of feeding on carbohydrates, a strain of E. coli has been designed to feed on carbon dioxide therefore removing it from the atmosphere[5]. While this is useful, I find myself being sceptical as unless these bacteria are utilised, they will surely die and decay releasing carbon dioxide back into the atmosphere? Hopefully I’m wrong and little E. coli can help mitigate against climate change but for the moment I question if there is an end to the usefulness of this little bug.

Now I am more educated on the uses of E. coli I can’t help but feel it has got a bad name for a usually harmless microbe. I have only highlighted 3 examples of E. coli awesomeness. Of course, some strains are pathogenic, but I still think this bug has more good points than bad. Especially when I heard it was used to create the artificial grape flavour and scent used in the food and drink industry. My childhood wouldn’t have been complete without Fanta grape and yet I would have associated my favourite drink with an ‘evil’ bug if I had known. To me, E. coli is truly a really useful bug.