SfAM spoke to to Elaine Cloutman-Green about Nosocomial: a devised play about AMR, diagnosis and the unseen work of healthcare scientists. 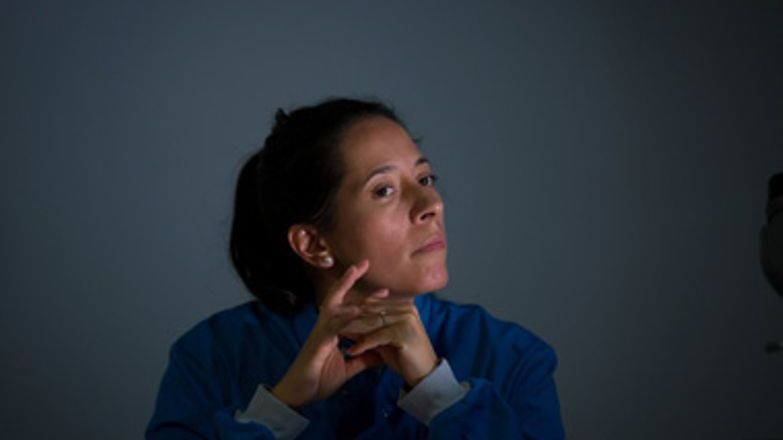 What made you choose performance rather than other forms of media?

I’ve always loved theatre and before I went to University, used to be heavily involved in drama and theatre production. The wonderful thing about theatre is that it is fearless, it isn’t restricted to messages that are easy to convey. This meant that for me it was a perfect medium for conveying not only what Healthcare Science is, but who Healthcare Scientists are.

Neither of those two topics are easy, partly as Healthcare Science consists of over 50 different disciplines and so you need a medium that can deal with demonstrating that diversity.  Also, as Healthcare Scientists are people, as well as scientists, the message needs to convey that the reasons people are passionate about this profession are also varied.

Theatre can deal with conveying stories in a non-linear fashion. Most patient cases don’t progress easily from A to B, therefore the life of a working scientist is often about dealing with complex ever-changing situations and theatre can be used to convey this in a way that interviews and podcasts can’t.

What did you learn about the world of theatre?

It has been a fascinating trip into a very different world.  There have been a lot of surprises for me, there are also a great many more parallels than I had thought there would be.  For instance, the development of this project has been very organic.  It has come about because of meeting with key people and then been gradually developed based on engaging a wider stakeholder group.

This is actually very similar in some ways to how I have developed research grants and involved patients in their co-production.  I think the biggest difference is the speed with which things happens, ideas are pitched and accepted or rejected very quickly, with the need to then deliver also being quite short term.  This is very different from the research and clinical world I live in, where it can take 18 months to develop a document.

I have also learnt a lot about the interest in and love of science that exist in the non-science world.  Whenever I met and talked with actors and other people involved in bringing this work to life, they have demonstrated such curiosity, love and appreciation for the science that it has been an invigorating process.

What was the biggest challenge in bringing Nosocomial to the stage?

I don’t know if it was a challenge as such, but my biggest fear was that I would fail to tell the stories well of the amazing workforce this play represents.  The scientists involved with developing the piece placed enormous faith in Nicola and myself by turning up and telling very personal experiences and sharing their values.  The trust demonstrated was immense.  I was therefore very aware of the duty we had to both the profession and individual contributors to do the topic justice.

The first night we met for the workshop I was terrified no one would show up, then as people began to arrive I was worried that no one would speak or ‘get’ the project and that we would be met with scorn.

Instead we were met by a response that still makes me smile. Everyone in that room loved their work, and felt a responsibility for the patients that they impact.  Everyone in that room felt they had a story to tell and were just so happy that someone had finally sat them down and asked what their story was.  I then had the easy part, I served food and drinks and let people talk – it was Nicola who then had to make it into a piece of theatre.

What was the most consistent message that came from the workshops?

The most consistent message was that of being hidden. People who make such a difference to patient care and patient outcomes, but who aren’t visible, not to patients and frequently not even to other NHS colleagues.  I believe that is why they responded so strongly to wanting to tell their stories.

These amazing scientists make a difference to 80% of those patients diagnosed in the NHS and their work really matters.  When those tests are discussed in public forums, at conferences, on TV etc they are frequently not asked to speak. It is often their medical colleagues who are given the voice.

Did you find it a challenge to find a balance between entertainment and message?

Nicola was always incredibly patient with me about being a science pedant.  It would have been an injustice to the workforce to use bad science to tell a narrative.  The wonderful thing about microbiology is that you can find legitimate scientific reasons why many things that need to happen narratively have happened.  We didn’t need to make ‘stuff’ up, we just needed to let the science tell its story.

We spent a lot of time with the actors correcting terminology, getting pronunciation correct and talking about the science they would be doing on stage.  Additionally, as weren’t trying to get a single message over, as such we weren’t restricted to a linear process.  We want the audience to come away understanding who these scientists are, as much as appreciating the science that is their passion and lives.

Was there an overriding educational aspect to the play?

The play has a general aim to increase scientific literacy by discussing some complex processes that are embedded within how we undertake outbreak investigations and the process by which patients are diagnosed.

The main theme we want audiences to walk away with is that science is present in everyone’s lives all the time and that scientists aren’t ‘other’, they are people like you.  Most importantly, Healthcare Scientists are so important to the future of the NHS and our future health. Most science that’s believed to be done by doctors and nurses is actually done by Healthcare Scientists- and we wanted to share that.

Casualty, ER, Holby City- audiences LIKE a hospital drama- what’s your favourite medical drama and why?

I’m going to be cheeky here and talk about a book series instead called the Newsflesh series by Mira Grant.  She’s and ex virologist who writes zombie sci-fi books where the science actually works!  So I love her.

In terms of TV I have had a lot of fun shouting at House over the years, whilst a lot of the science is vaguely good, the outcomes frequently aren’t correct and the science would definitely be done by Healthcare Scientists.

There will be a reading of Nosocomial on March 8 to celebrate Healthcare Science Week and International Women's Day 2019.

Nosocomial was funded by an SfAM grant