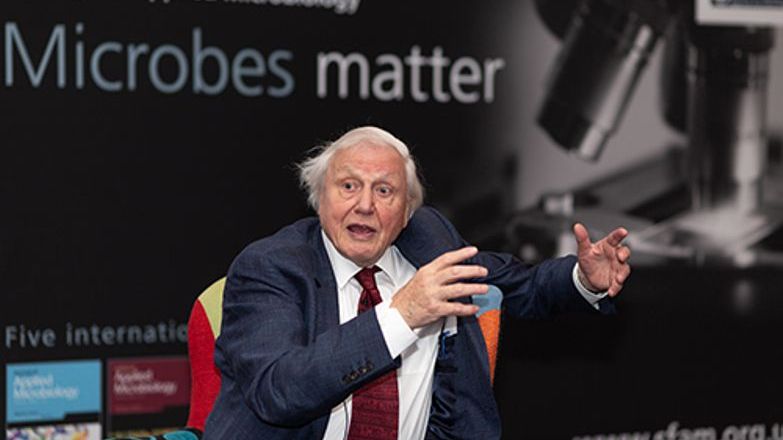 Sir David Attenborough is the United Kingdom’s best-loved naturalist and natural history broadcaster. Over the past 60 years, Sir David has been able to expertly educate audiences across the globe about our minute world of astonishingly diverse microbial lifeforms. The innovative and ground-breaking episode Arrival, from the First Life with David Attenborough series (BBC 2010), gave the world a perfect example in both storytelling and in terms of photography of the origins of life, reminding us all it’s a microbial world, we just live on it.

In 1980, he was honoured by the Open University with whom he has had a close association throughout his career. By January 2013, Attenborough had collected 32 honorary degrees from British universities, more than any other person. In 1985 Sir David received his knighthood. He was previously honoured with a CBE (Commander of the British Empire) in 1974. Sir David is the only person to have won a BAFTA in black and white, colour, HD, and 3D.

There was a ripple of barely controlled excitement when Sir David Attenborough stepped into the room at the BMA. People craned to see his snowy thatch of hair and then grinned with the giddy enthusiasm of toddlers meeting a superhero.

The room may have been full of acclaimed academics, lecturers, researchers and industry high-flyers, but the presence of David Attenborough reduced everyone to a child-like wonder. As the great man is 92 years-of-age and a fixture of broadcasting since 1954, there’s few lives he hasn’t touched in some way.

As President Mark Fielder pointed out in his introduction, Attenborough has inspired generations of scientists, by prompting an early fascination in nature that in many cases bloomed into a lifelong passion for microbiology. That was certainly a story which echoed around the Paget Room at BMA House.

Sir David was presented with a gift from SfAM and while accepting his Fellowship, highlighted the work SfAM is doing on the marine microbiome. To illustrate this point, he spoke of some recent filming he’d completed for the BBC, where they’d featured birds nesting in the North Pacific.

The bird parents were seen unwittingly feeding plastic flotsam to their chicks, from waste discarded by ships, offshore dumping, litter on beaches and washed to sea by rivers. While not the direct cause of death, this plastic causes physiological stress and causes the chick to feel full during feedings, reducing its food intake and the chances of survival.

SfAM members had sent in a range of questions and the ECS committee members had the nerve wracking job of pitching them to Attenborough. Asked if he’d ever been attacked by an animal, he was very swift with his answer.

‘No. Animals don’t want to attack you. If you are silly enough not to take a warning sign- and if you are stupid enough to stand on a snake, then yes, it it’s your fault for being a dimwit.’

Attenborough was keen to point out the relative safety of wildlife, compared to the foibles of humanity.

‘The only time I’ve really feared for my life was when I was faced with a man. And a gun. And he’d had a few drinks.’

Attenborough talked of his love for baby chimpanzees, adding that adult chimps, however, could be unpredictable and aggressive. ‘They are so like us’ he added.

Asked if he was allowed to choose the locations for his TV shows, he admitted that those days are long over, but at the beginning of his broadcasting career, he’d chosen to film in the Great Barrier Reef and the Galapagos. Current production schedules mean there are a 30-strong camera crew who’ll work for 3 years to film a series, with his contribution added after their pioneering work.

‘I have the easiest job in the world, he admitted. ‘The privilege? What a joy. What a delight Anyone can film anteater, but nobody had bothered. I had the time of my life, and I haven’t stopped’

Asked if time travel were possible, what period would he travel back to, Attenborough barely paused before stating,

‘The Late Cretaceous period, not because of the dinosaurs, but to see the pterosaurs.’

He spoke of Quetzalcoatlus northropi with its with estimated maximum wingspan of more than 5 metres.

‘It must have glided like an albatross, but how did it get off the ground? They say it might have lived near cliffs, but how did they return to them? There’s a theory that they had enormous muscles in their legs and would jump up and spread their wings.’

Dylan, aged 9 and a pupil at Ashton Keynes Primary School asked, ‘What challenge facing conservation of our planet would you like to see solved by someone of my generation?’

Attenborough embraced this question with the enthusiasm you’d expect. He looked Dylan in the eye and replied as if it was the most important question of the night:

‘Convincing people of the world that producing an energy by burning things is going to heat the world up. We have the technology to take energy from the sun. The science is there. The question I have to ask myself is do human beings have the common sense to use unlimited power (which is what the sun is) for sensible things.’

It was powerful and touching to hear Attenborough focus his attention on the next generation with kindness and respect. He spoke to 9-year old Dylan as a peer, and it’s clear he acknowledges the dazzling effect he has on young people and how that can be used to inspire them. He knows how to put people at ease and doesn’t take himself too seriously.

Sir David Attenborough was given an honorary fellowship to SfAM in recognition of the role he’s played in raising the profile of the importance of microorganisms in the environment, as well as his contribution towards highlighting the urgent need to protect our oceans.

What he has given us in return is his passion, wisdom, and appreciation for the natural world. This is an invaluable gift to the next generation, and to the planet we live on. It’s an honour and a delight to welcome Sir David as part of the SfAM family.

Members will be able to view the video of this event here when logged in
Published: 28 Nov 2018
Last reviewed: 07 Dec 2021
Fellow
Return to listing