The Bad Bugs Bookclub is a group for scientists and non-scientists to get together and talk about fiction books in which infectious disease forms part of the plot. 2019 marked their 10th anniversary, which SfAM's Public Engagement Grant helped make extra special.

In 2009, I set up the Bad Bugs Bookclub, a group for scientists and non-scientists to get together and talk about fiction books in which infectious disease forms part of the plot. The aim was to engage all participants in discussion, to consider the accuracy of the science, its relevance to contemporary issues and the value of fiction in science literacy. SfAM supported the first event, which combined a screening of the movie Outbreak, and a bookclub meeting discussing The Hot Zone by Richard Preston.

Since then, we have read almost sixty books, and the website contains meeting reports and reading guides for all of these events. I applied to SfAM for a public engagement grant in 2019 so that I could better promote the bookclub and the website as a resource for those wishing to start their own reading group, who wanted to read some of our books in an existing group – or who just wanted to read the books and think about the science within.

The funding from SfAM focused primarily on bringing the bookclub to relatively isolated communities: the Penzance Literary Festival and the Orkney International Science Festival were approached and were delighted to accommodate sessions in their programmes. 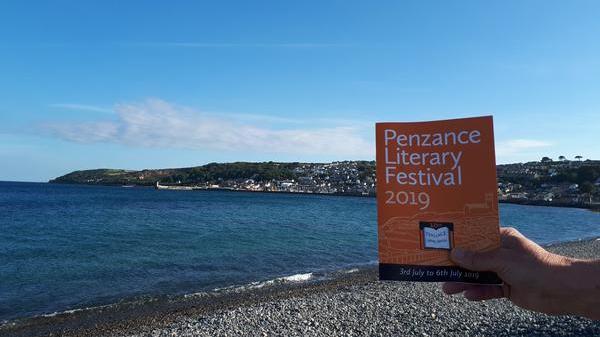 In Penzance, the focus was on introducing the audience to the bookclub and the value of using literature to bring science to new audiences. My Litfest contact said “how welcome it was to see literature and science linked once more as they would have been until the 19th century separation - the Litfest was delighted to help bring the two sides back together for the 21st century”. As a result of the well-attended and well-received talk, the local comprehensive school set up their own bookclub for years 10 and 11, focusing on one novel discussed at four meetings each term, and with specific reading/researching targets set for each meeting. The first book is Nemesis by Philip Roth (I purchased 10 copies for the school from my funding), and the final meeting (which I will attend) will be on November 7th. A different YA (young adult) fiction angle will be played out during this year’s Gothic Manchester Festival, where we will look at the epidemiology and pathogenesis of zombie-ism using Zom B by Darren Sham, The Enemy by Charlie Higson and Dread Nation by Justina Ireland in combination with our SimZombie simulation and other games.

Orkney International Science Festival was more opportunistic in their use of a visiting scientist! The library at Kirkwall shortlisted ten novels from the bookclub website, from which we selected five: Star of the Sea by Joseph O’Connor, World War Z by Max Brooks, The Island by Victoria Hislop, Oryx and Crake by Margaret Attwood, and A Lovely Way to Burn by Louise Welsh. Thus my session included discussion about the novels as well as an overview of the bookclub. I donated some copies to the library so that multiple copies of each book were available. All of the audience had read at least one of the books, and several members were already in reading groups, so were interested in using some of the novels for future meetings. In addition, the festival asked if I would do a talk on yeast as part of a tour of the famous Highland Park whisky distillery, and host a ‘Menus made by Microbes’ event at the festival hub. The science focus of this festival seemed more flexible and open to innovative science events than the literature festival, who were perhaps less familiar with a visiting scientist! I wonder what will happen next year!

My interest in microbiology and fiction has really let me get involved in some fantastic events this year. For example, I was invited onto a panel at Bradford Literature Festival to discuss ‘Inevitable Epidemics: Death in the Air’ with author of The Pandemic Century Mark Honigsbaum. I contributed my experiences about science and the arts in a discussion recorded at Cheltenham Science Festival and broadcast by BBC Radio Gloucester.

Manchester International Festival and Contact Theatre hosted ‘Sanitising the Working Classes’, an immersive event commemorating the cholera epidemics and mass burials in Manchester in the nineteenth century – again I brought my unusual microbiology/literature perspective to a panel! SfAM also hosted a public event at the FEMS Congress in Glasgow, where a conversation with author Lesley Kelly revealed how knowledge of epidemiology and public health contributed to her Health of Strangers series of novels, in a session entitled ‘Influenza: in fact and in fiction’.

The final event for which SfAM funding was used focused on The Killing Snows by Charles Egan. The novel describes the potato blight disaster leading up to the Great Famine in Ireland, for which infectious disease such as typhus, cholera and dysentery claimed more lives than starvation itself. The author travelled from County Mayo to the Irish World Heritage Centre in Manchester, and gave a talk about his research for the book, his family history, and about how the famine has affected Ireland. More than seventy people attended the talk (which was preceded by a bookclub meeting), providing an appreciative audience who had not expected to hear quite as much about microbiology as they did! 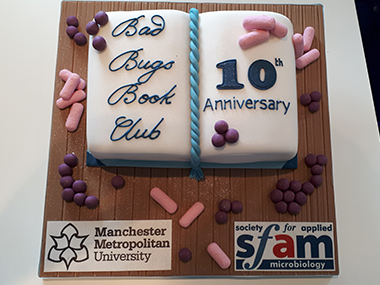 The funding also contributed to a cake and room hire for a tenth anniversary birthday party to which all previous collaborators and bookclub members were invited. We looked back on our previous meetings (overall, Nemesis was the favourite book in terms of literary excellence and scientific interest – a polio epidemic before knowledge of epidemiology, transmission and pathogenesis were known formed the underpinning element of the story), and forwards to the ‘next ten years!’ We certainly are unlikely to run out of books. Personally, I have learnt such a lot: reading work from a range of authors has been fascinating and educational, and discussing the novels with non-scientists in an informal environment enables engagement on a level and different platform.

So, over the year, I have met several hundred (primarily) adults, using fiction as the focus for engagement with microbiology – and the ‘normal’ bookclub meetings have carried on as usual. The bookclub website received increasing numbers of hits (this will be monitored until the end of the year), and I am planning to develop a more interactive website at the end of 2019. I only hope the audiences have enjoyed finding out about microbiology and fiction as much as I have.

Thank you so much SfAM for supporting the bookclub at the beginning, at this important marker, at events during the ten years – and hopefully in the future!

Joanna Verran is Emeritus Professor of Microbiology at Manchester Metropolitan University. In 2019 she received the AAAS Mani L Bhaumik award for Public Engagement with Science for ‘her commitment to devising and delivering innovative microbiology-focused public engagement with the same rigor as laboratory-based research, with attention to appropriate design, thorough evaluation and wide dissemination’.